The Good News About Depression

The current state of treating depression, even major clinical depression, is all good news. The medications and therapies for depression work well, and better medications are in discovery. The combination of the right medication and quality psychotherapy is a dynamite effective approach. Every depression treatment plan is (or should be) based on this model. So be encouraged that everything is getting better. As always, we remain on your side to praise what works, debunk anything that doesn’t work, and encourage you to better health and better care.

Welcome to the Neuroscience Research and Development Consultancy website. Have a question or a comment? Send it to us at: Comment@NeuroSciRandD.com

Signs and Symptoms of Major Depression

Depression is a medical condition, a physical brain disorder. Its most obvious symptom is a depressed mood on most days. Depressed mood meaning a sad, feeling empty, hopeless, maybe crying. In children and teenagers it might be more of an irritable mood than depressed. The person with a major depression isn’t interested in anything and nothing seems to be fun. Eating and sleeping can go either way. Eating too much or not enough and sleeping too much or insomnia. More on that below. Mostly a depressed person has a low energy level and doesn’t want to do much. They often feel worthless or guilty, and can’t make decisions or think clearly. They might complain of fatigue, of having no energy. But some depressed people get agitated and restless. They might keep thinking about death and suicide. Anxiety can mix in with depression. They are upset and distressed.

A Reader in the UK Asked:

What Is Depression, Really?

The website reader who sent this question asked what’s really going on in depression? What is it? Okay, it’s a brain disorder, but what does that mean. The answer: We don’t know. Or, to be fair, medical science has not fully and clearly defined all the little bits and pieces of brain and body chemistry that are there when a person is depressed, and which brain areas are involved and which circuits aren’t right. There is more to be found. For example, why do most antidepressants take four to six weeks to work while ketamine and esketamine sometimes work in a day or two?

What we do know, or what we think we know, comes from seventy years of seeing which medications successfully treat depression, at least for most people most of the time. The first good medications for depressed mood were discovered accidently. The first, iproniazid, was actually made for treating tuberculosis. Along the way, people noticed the patients with tuberculosis who were also depressed and got iproniazid became less depressed. Learning how these first few antidepressants worked showed the way to find more, new antidepressants. It has been a slow step by step journey from one medication that works to the next one that works. The hope is always that the newer ones will work at least a bit better or with fewer side effects. But, of course, this isn’t always true. Sometimes they just cost more.

It’s Confusing Because the Word “Depression” Means So Many Things

We all toss out the word “depression” to mean we’re bored, or tired, lonely. It describes moods of all sorts. If a friend or relative says they’re depressed we usually know they mean. But with someone we don’t know, “I’m depressed” can me almost anything. “I’m depressed” might mean a brief and minor down feeling.” Being both bored and depressed might be the “Sunday afternoon blues”. Yet depression can refer to the worst medical, clinical, down, dark mood, with hopelessness and suicidal thinking. And even at times, with completed suicide. Dead. Such a terrible, life-threatening depression needs real and urgent medical care. And we say “depression” to mean every shade and type of moodiness between the least and the worst.

More on Eating and Sleep in Depression

A depressed person’s appetite and eating, and their sleep, is usually not normal. But, one depressed person to the next, it can vary in either direction. One person might eat a lot to sooth their soul (comfort food like a cupcake with lots of icing, or a Coca Cola and Cheetos, or a bag of thin mints at bedtime) and eat too much, gaining weight. Another might have no appetite and eat very little resulting in weight loss and getting skinny. Sleeping can also be one of two extremes. Either bad insomnia and can’t sleep a wink or sleep as an escape from the world and sleeping a lot. But, whether sleeping too little or a lot, depressed people do not feel rested after sleeping. They’re always tired. Their body and brain are just not right.

Spotting Depression from Across the Room

A good friend might be able to tell if you have a bad depression. A close relative who cares about you might also be able to tell. There are many easy, short computer or paper-and-pencil tests (see explanation of Beck’s Inventory below) that will say whether you might have a medical depression. An experienced and skilled doctor can probably spot depression in a person from across the room. The bottom line is, seeing depression and telling if a person is depressed is not a mystery.

The Indiana State Medical Association has provided a site for physicians called “Doctor Your Spirit”. The site is to help doctors pursue their own health and wellness, avoid burnout, and recognize depression in themselves. The link below is to the site’s free Beck’s Depression Inventory, a famous and highly regarded self-test for depression. Click on the link. Download and print the three-page test and take the test in the privacy of your own home. You score the test yourself. The directions for adding up your score are at the bottom of the Inventory.

Information About Treatment for Depression

Here’s a link to our free page on treating depression.

There are different types of major depression. There’s bipolar disorder, or manic-depressive disorder. Bipolar depression is a time of down mood sandwiched between times of mania. Depression without ever having mania is called unipolar depression. Then there are depressions that are unusual, that is, not typical. No puzzle here, as they are referred to as Atypical Depressions. And “psychotic” depressions are another type, during which one loses touch with reality. And then there’s postpartum depression after childbirth. Premenstrual dysphoric disorder is bad depression (and again, we mean real serious depression) associated with one’s monthly period. But really they’re all severe and possibly dangerous depressions. They are all brain-based disorders, medical conditions just as much as diabetes, heart failure, or a broken arm. And just like these other medical conditions, depression needs real medical treatment.

So, What Are Lonely Saturday Night Blues or Sunday Afternoon Blues?

So what are lonely Saturday night blues or a Sunday afternoon slump if not depressions? If you’re feeling down and lonely on a Saturday night but a friend and a hot fudge sundae makes the world great again, that’s not the kind of medical depression we’re talking about. The same with a Sunday afternoon droop. Moodiness is not medical. We do like hot fudge sundaes, though, and they’re better with friends. (Here’s a boldfaced plug to subscribe to our site: A one month subscription to our site costs about one-sixth of the cost of a good hot fudge sundae.)

Depression is a Common Medical Condition

This severe type of depression, medical depression, is common, sadly, really common. Worldwide, among all of the medical and surgical conditions, it’s the fourth leading cause of disability. One out of every 10 people on this planet will have at least one episode of major medical depression at some time during their life. So the likelihood is that you know someone who has had such a depression.

A Reader in New Jersey Asked:

If someone is down why not just give them an “upper”?

That is, why not just maximally stimulate everything? Well, it’s been tried again and again for over a 100 years, and…

One might think that if you give a depressed person an “upper” drug, like an amphetamine or cocaine, their mood should go up. Problem is, it just doesn’t work right. Maybe they would feel up and energetic for a few hours, but then the “up” stops and down they crash. And “crash” is the right word because when they come down they are more depressed than they were before they took the stimulant drug. Odd as it might seem, the “upper” drugs don’t treat depression well at all.

More on Trying to Treat Depression with Amphetamines

So maybe a depressed person takes a stimulant drug and for a few hours they might feel a bit better. After that first few hours the depressed mood is back, maybe even worse. The stimulant can be used again but this second time it takes a higher dose to boost mood and energy. Each attempt to stop the depression with an upper drug requires a higher dose. Within a few days of chasing this up and down roller coaster there is no stimulant dose high enough to change the depression. But with higher and higher doses of the drug the side effects add up to full-blown toxicity. Keep pushing the dose and soon the person is on their way in an ambulance to the nearest Emergency Department, hopefully not dying in transit.

Slow But Sure, Well, Almost Sure, To Treat Depression

Another odd thing that medical science has not yet understood is that almost all of the medications that do eventually work to treat depression take weeks for the benefit to become obvious. Not good. We need a quickly-acting treatment for depression. Maybe ketamine or esketamine, which is being used more and more, will be the drugs to save the day. 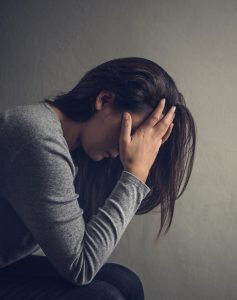 If you find yourself in the valley of a clinical depression, go see a professional. See an experienced physician, a psychiatrist, to get a firm diagnosis and get a prescription for a medication. Then, get into therapy. The good news is that there are many medications and a variety of therapies that work well. The surest cure is medication plus therapy together. Sometimes you need more than one medication and a second one is added to help the first one work better. When doctors use ketamine or esketamine a second medication is also started. One works fast but the benefit might fade over time and one starts working more slowly but, once it works, it will keep working for a long time. And remember that each person is an individual and needs a treatment plan that is specially made for that person.  Medical care for depression is not “one-size-fits-all”.

What is Depression? – American Psychiatric Association